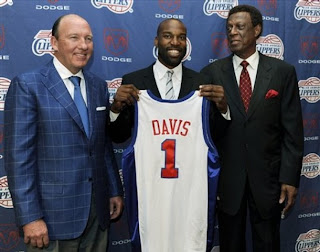 Because the Lakers share Staples Center with NBA's Clippers, Mike Dunleavy, Lakers, Elgin Baylor, NBA, David Stern, Mike Dunleavy Jr.Special Olympics contingent (The Clippers) there are certain nights that either team will usually play. The Clippers tend to get Mondays,Wednesdays,and Saturdays, while the Lakers get Tuesdays, Thursdays, Fridays and Sundays. It's my understanding that some bizarre game involving sticks, rubber "pucks" and ice is also played at Staples Center, but I'll believe it when I see it.

I personally would love to see the Clippers bail to another locality, leaving the Lakers the flexibility to schedule home games on Saturdays, Mondays and Wednesdays, a flexibility that can only benefit Laker fans and eliminate some Sunday home games in which the lakers wear their hideous "Sunday Whites." I know, I know, this is about the Clippers, not the Lakers, I'm getting there.

So the Clippers are coached by Mike Dunleavy. Mike Dunleavy is kind of a dick. He was a dick when he coached the Lakers 18 years ago. He was a dick when he coached the Trailblazers. He was even a dick in Milwaukee, a harmless ma and pa market. The point is, he's a dick. He's just like so many WCM's that run coorperations or hold VP of Creative Services Titles at networks where I've been employeed (see Flight of the Ghettobird for more on that). I'm talking about guys that make bad decisions, are predatory against their co-workers, seeking to yeserp the power and/or salary of anyone who poses a threat to their authority or has the knowledge to expose them for the fraud they are.

Okay, now for the last 22 years, the Clippers were run by NBA Legend, Elgin Baylor. He might not have been the best GM (though he did win NBA Executive of the Year a few years ago), but he was a gentleman and a basketball giant who was up against great odds running a cursed franchise for a Slum-Landlord of an owner. It's a thankless job, but Elgin sat there and took the heat for losing season after losing season all the while knowing that Clippers owner, Donald Sterling was the real reason for all of the teams shortcomings. If I sound defensive for Elgin Baylor's sake, I should let you know, the man was a Laker. In fact his number is retired and hung in the rafters with other Laker's greats. 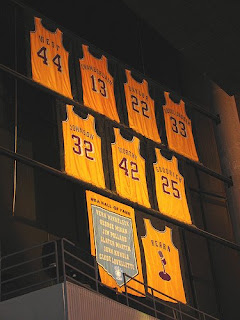 Anyway. This season, Mike Dunleavy wedged out Baylor and took over his responsibilities, claiming he had been responsible for signing players and negotiating their contracts for months now, so Elgin had become expendable. This, I should note, came after a summer in which the Clippers failed to resign Maggette and Brand (both moved on to greener pastures) and looked to build their team around perennial locker-room cancer Ricky "Motherfuckin'" Davis and great but always-injured Marcus Camby and Baron Davis. Brand and Maggette could not wait to get out of town. Brand even went as far as not even calling Dunleavy to let him know he had decided to sign with the 76ers. That's how much his own players hate the guy. I also should note that at one point, Dunleavy had lobbied to trade away valuable assets to acquire his own son, Mike Dunleavy Jr. a player whose skills are only valuable in my Dorky White Guy fantasy league. Thankfully, it was Elgin Baylor who put the kibosh on that. My point is, Dunleavy is a hack GM who makes selfish decisions. The fact that Baylor was forced out by that prick and the Clippers didn't even have the class to send out a press release or stage a press conference. They merely omitted Baylor from the 2008/2009 press kit. Unbelievable! 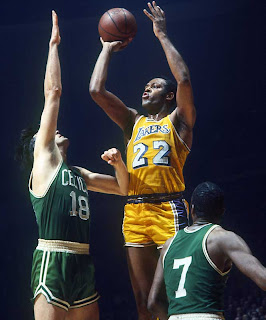 This brings me to my point, The Clippers' Curse. Now the Clips are forced to play every home game in the shadow of Elgin's retired jersy. I only hope this finally convinces them to be the first NBA team in Afghanistan, I'm sure David Stern is already checking out the cheap labor and getting ready to market Clippers' Burkas and Baron Davis-Kabobs.
Posted by Ben Le Vine at 12:43 AM

I'd like to see Mike Dunleavy and PJ Carlesimo fight to the death armed only with nosehair trimmers.