So I like movies - okay, in all fairness, I watch movies and sometimes I like them. Part of me thinks, because of what I do and what I hope to do, that if someone went through all of the trouble to make a film (trust me, it's very, very difficult- allow me to go on a tangent; So let's say you have an idea for a company you want to start and you need $1 million to start said company. Once that company is off the ground and running, in theory it should then become self-contained and generate a profit and be something to leave to your slowest child so they always have something to fall back on. No small task, right? It's not easy to get that kind of start-up capital even if you have a sure-fire business plan that is guaranteed to make 300 times the initial investment. Now imagine you want to start a business that will only exist for about 6-16 months, will only generate 1 product that will have to subjectively appeal to a mass audiences and then said company will go away like it never existed, but hopefully continue to draw equity from this one "product." That is what it's like to get a budget to make an independent film. Sorry, as I was saying. . .) If someone went through all of that trouble to make a film, and it's on cable and I can DVR and watch it when there is absolutely nothing else to do, dog-gone-it, I'm gonna watch it!

Anyway, so about a week ago I was suffering through some insomnia and I was flipping through the channels (not specifically looking for Skinemax, fyi) and I came in about 30 minutes in to Grosse Point Blank (or GPB if you're not square [doing that thing with my index fingers, kinda outlining a square] ) and I realized that I actually liked this movie. So I set a timer and sat down tonight and watched the entire film for the first time since 1998. The first time I saw it I believe was on DVD (and it had to be like the 3rd DVD I ever saw if I'm correct) and I remember seeing it with my ex-girlfriend when we first started dating. This girlfriend had actually used one of her "name 3 celebrities you get a pass to sleep with should the occasion ever arise" on John Cusack, so I had that going for me. In all fairness, though, we both had quirky choices. Mine were Sarah Silverman, Parker Posey & Milla Jovovich

(which in retrospect, I maybe could have done better than that but I made my bed and I slept in it(with my GF, never my celebrity crush). I believe her 3 where Cusack, Dick Cheney & The not-so-tall guy from the Station Agent 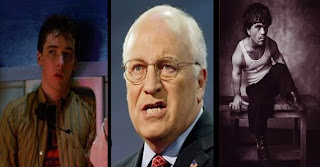 - but I might be wrong about the last two and maybe my picks were more like Jenna Jameson, Tia Carrere and Betty White, but none of that really matters right now.

Where was I? Oh that's right, GPB: 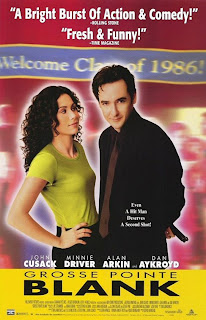 Now I can talk about the metaphors: Contract killing is like any job you hate but you do for the money, you can't go home again, Michigan sucks balls (okay, not really a metaphor), but I'm going to spare you that. I'll sum up in a few sentences what would have been a painful to watch sequel- where would Marty and Debi be now, 12 years later?

So let's say Marty has been out of the killing game for 12 years. He had some cash saved up, but not enough for 60 years of retirement (by the way, anyone else not buying the idea that Cusack was 28? I mean, I forgot about it midway through act 1, but they keep reminding you that he's only supposed to be 28 every time they say "high school" or "reunion" or "high school reunion" or "10 year high school reunion"). Let's say he and Debi open a little bed and breakfast somewhere in Maine or Vermont or even Northern California, do they have kids? Are we to believe that Marty would never feel that urge to kill again? Take it from Homer Duklau, once you've had that taste of blood on your lips, you thirst for it. So let's say Marty starts "taking care" of guest he doesn't like. It starts with one guy who refused to pay for his ppv Porn, next thing he's whacking a guy for double dipping at the Continental breakfast. Maybe he even gets Debi into it, maybe it even becomes the only way they can get off. I saw movies in the mid 90's, they were all about disenfranchised young couples shooting and fucking their way across the country. By the way, interesting fact, my ex had the opportunity with Dick Cheney, but he can only get it up if he fucks on a pile of dead babies. True Story.

So what's to become of this iconic silver-screen couple? I mean this was a big panty dropper back in the late 90's. Almost like post baby-boomer version of Bogart and Bergman in Casablanca. Even guys got a little soft on the plot because everybody has someone they still felt for - someone they hurt because they were young and stupid. We could all relate, but the fact is, most likely Marty and Debi got into a fight a month later in a hotel room in Laughlin, NV over something stupid like which buffet they were going to eat at and Marty put a fucking bullet in her head and buried her in the desert. I know! It's awful, but he's a killer and they never really had a relationship built on trust, at least that's how I see it. By the way, my guess is that Piven's character had a massive coronary at a Spearmint Rhino like 5 days after the reunion.
Posted by Ben Le Vine at 1:18 AM 3 comments:

Cruel. Cruel that my short winter break is over. Cruel that I now have to return to work to cheery, "Happy New Year" greetings from people. I suppose I could have gotten some blogging done over break, but I bought Rock Band 2 and that's where my time went. Okay, my producer just showed up, so now I actually have to work.
Posted by Ben Le Vine at 11:22 AM No comments: