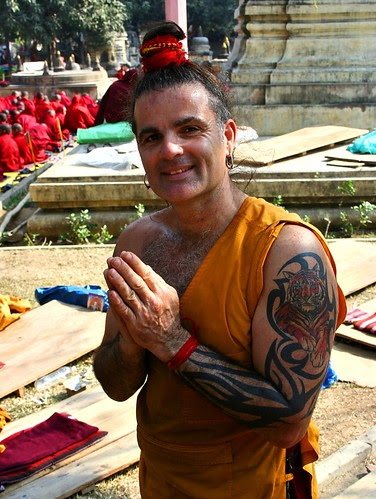 Here's a thought: Remember when Buddhism was cool because it wasn't like other religions. You didn't have that one person at a dinner party telling you how much better your life would be if you just let go of your attachment to material things and accepted their impermanence and that you could find the strength to get through any situation by seeking the power of meditation.

Don't get me wrong; I like the idea of Buddhism, but I'm conflicted because I also have such a huge distaste for organized religion. Religion is and has been one of the leading causes of war, hatred and bigotry in recorded history. Religion can also be one of the most offensive things a person with their own defined spiritual boundaries can be confronted by. When I was 7, my family moved to Cerritos, CA, which at the time was a bit of a cow-town. It was a wonderland of brand new track homes sold to a community of rednecks who all moved further into the desert the moment the first Mexican and Chinese families bought homes there. Anyway, as a nice Jewish boy (the only Jewish boy) in my class, I was shocked when who I thought was my best friend warned me that I would burn in hell if I didn't accept Jesus Christ as my personal savior. [Yes, a 7 year old said that to me, like I said, a wonderland.] So I have my own personal issues about people attacking others with their religious views.

That all being said; have American Buddhists become like modern-era born-again Christians? Do Americans even have the wiring to shed their narcissism in order to enable them to function as true Buddhists? Come on, the irony of an "om" symbol sticker on the back of a brand new BMW isn't lost on me; neither is the irony of someone talking your ear off about how much better your life could be if you found your center through the teachings of the Buddha - but is that irony even visible to those who perpetuate it?

If someone sent you an event invite on Facebook (by the way, if you aren't familiar at this point with the way Facebook works, then there is no saving you. Even my parents are on Facebook, get with the program) Okay, so say you received a Facebook invite to some kind of Christian, Catholic or Jewish group meeting (assuming that you are not a practicing member of said religion) offering an opportunity to learn more about said religion. There is a good chance that you would either be offended or very dismissive of said invite. Now imagine you received that same invite, but it was for a Buddhist retreat or a Buddhism information gathering, would you feel the same way? Do you think that's how shit goes down in Tibet? This is less about Buddhism, I suppose and maybe even less about organized religion, but it definitely about how Americans epically fail at taking something beautiful and incorporating it into our culture and how hipster douchebags can take all the fun out of studying something interesting.

I will continue to practice my own meditation but this will undoubtedly keep me among the masses that keeps their own spirituality and does not wear it like a superhero cape, lean on it like a crutch or stand on it like a pedestal so I can look down on those who don't stand there with me.
Posted by Ben Le Vine at 4:15 AM No comments:

Hi, my name is Shaq. Please pay attention to me.

I love Shaq. I hated him like an ex girlfriend after a bad breakup when he left the Lakers, but 5 years later I can admit, I never got over him. Here he is making the long drive across his property from the guest house to the main house.