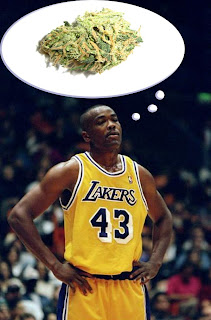 I just got this story from Yahoo Sports:

HAMILTON, Ohio (AP)—Former NBA basketball player Corie Blount has been charged with picking up 11 pounds of marijuana in southwest Ohio.

Butler County Sheriff Richard Jones said after the 39-year-old Blount retrieved the package from a Liberty Township address on Thursday, deputies followed him to his home nearby and arrested him. Jones said officers found another 11 pounds of marijuana inside Blount’s house.

Blount was charged with felony drug possession. He was released from custody on $10,090 bond.

His phone is unlisted and court officials couldn’t say whether he has an attorney.

Wow, I was a Blount fan from his days in the Purple and Gold, so I'm sad for him and his family - not because he likes weed, but because a felony drug rap (especially in Ohio) is never an easy thing to deal with, but maybe we all need to consider the possibility that being an NBA player is a gateway position that leads to marijuana use. Consider the others who have been busted: Kareem Abdul Jabbar, Robert Parish, Eddie Griffin, Joakim Noah, Marcus Camby, Allen Iverson, Isaiah Rider, Lamarijuana Odom - and those are just a few of the guys who have been caught!

Richard Dumas, a former Phoenix Sun who was banned from the league for drug and alcohol use in the 90's once said, "If they tested for pot, there would be no league. . . Weed is something guys grow up doing, and there's no reason for them to stop. Because almost everyone does it, no one wants to test for it. They're afraid to.'' Of course that was back in 1997 before the league implemented their modern drug testing policy which includes screening for pot use.

From my personal experience as a basketball enthusiast and marijuana user (for medical purposes) I can tell you that the two go together like Chocolate and Peanut Butter or Rum and Coke or Beer and Pretzels. If you smoke a joint on a playground and someone hands you a basketball, it feels pretty fucking amazing. I personally wouldn't go so far as to call it performance enhancing, but it really doesn't hurt your game too much either. Let's just agree to file this under "David Stern loves Sausage, but doesn't want to know how it's made."

Here's a list of Blount's smoking buddies for each year of his career:

OMG, you are the coolest.